All Collections
Bracket and Event Settings
Brackets
Swiss on start.gg

Swiss is a round-based, non-eliminating tournament format that can quickly handle a large number of players in only a few rounds, all while avoiding rematches.

In each round, players are paired with another player of similar skill or points gained from winning matches/games in previous rounds. This process is repeated until a winner or desired number of players to progress is determined.

NOTE: To maximize efficiency, it's ideal to have enough stations for all matches to be played at a given time. This makes Swiss great for online tournaments as well as offline events with enough stations. 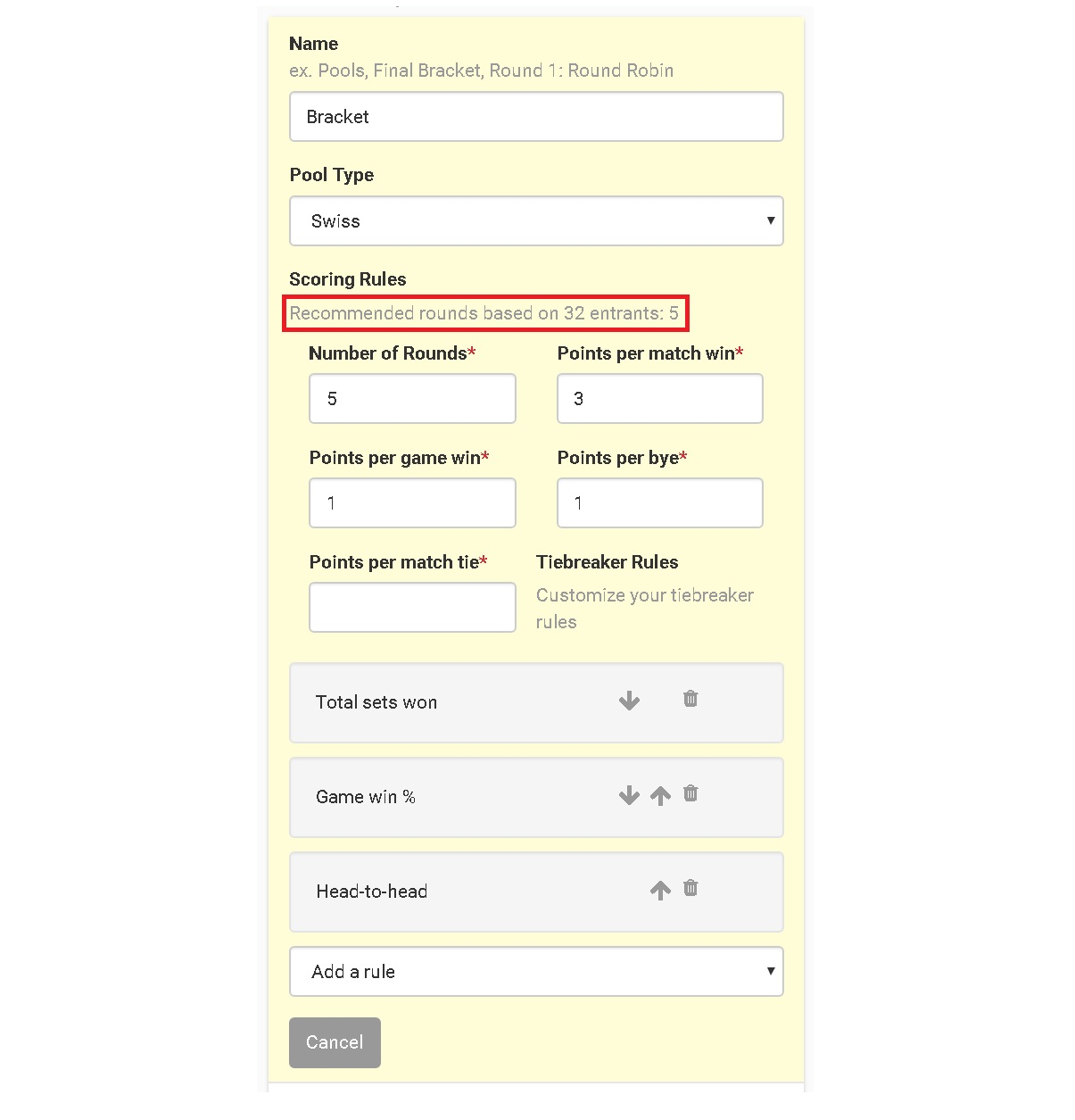 Once the event is created, go to the Bracket Setup page in your Tournament Settings, set the pool type to Swiss, and adjust the following:

Determines number of rounds played before standings are finalized or players are progressed.

It's important to provide enough rounds to adequately score players but not so many where the tournament is needlessly long. Generally, the ideal number of rounds results in a single player with a perfect record after Swiss is completed. To calculate this number (also displayed in the admin as shown above):

Determines number of points per match or set win.

Determines number of points per game within a match win.

NOTE: Points per match and points per game stack. For example, if they're both set to 1 and a player wins a match 2-0, then the player gains 3 points total.

Determines number of points gained when paired with a bye. Byes are introduced when there’s an odd number of players. They are algorithmically assigned to a different player in the lowest point tier in each round.

NOTE: In general, we recommend setting this to the total number of points gained for winning a match. 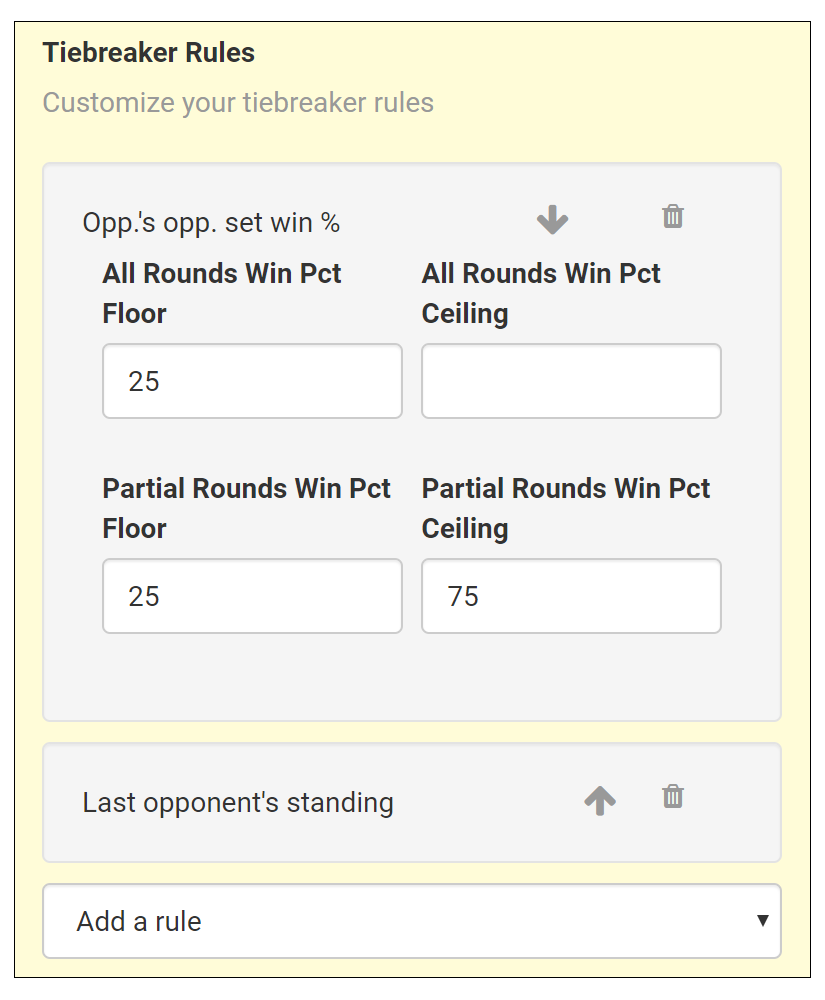 Ties can happen when multiple players have the same score after Swiss is over. Ties can be resolved by tiebreaker rules. Based on the image above, you’re free to add, remove, and swap the ordering you’d like for your tiebreaker rules.

The order in which you place your specific tiebreaker ruling will be taken into account from top to bottom, meaning “Opp.’s opp. set win %” takes priority over “Last opponent’s standing.”

To learn more about tiebreakers in greater detail, click here.

Swiss matches can be accessed in the Bracket admin. To start a Swiss event, click the Start Bracket button on the top right of the page.

Once the event is started, matches can be reported, (auto)-assigned stations, and assigned timers by round. You can also do the following mid-event:

Swiss handles matches by rounds, meaning the next round of matches won't be available until all matches in the current round are reported. 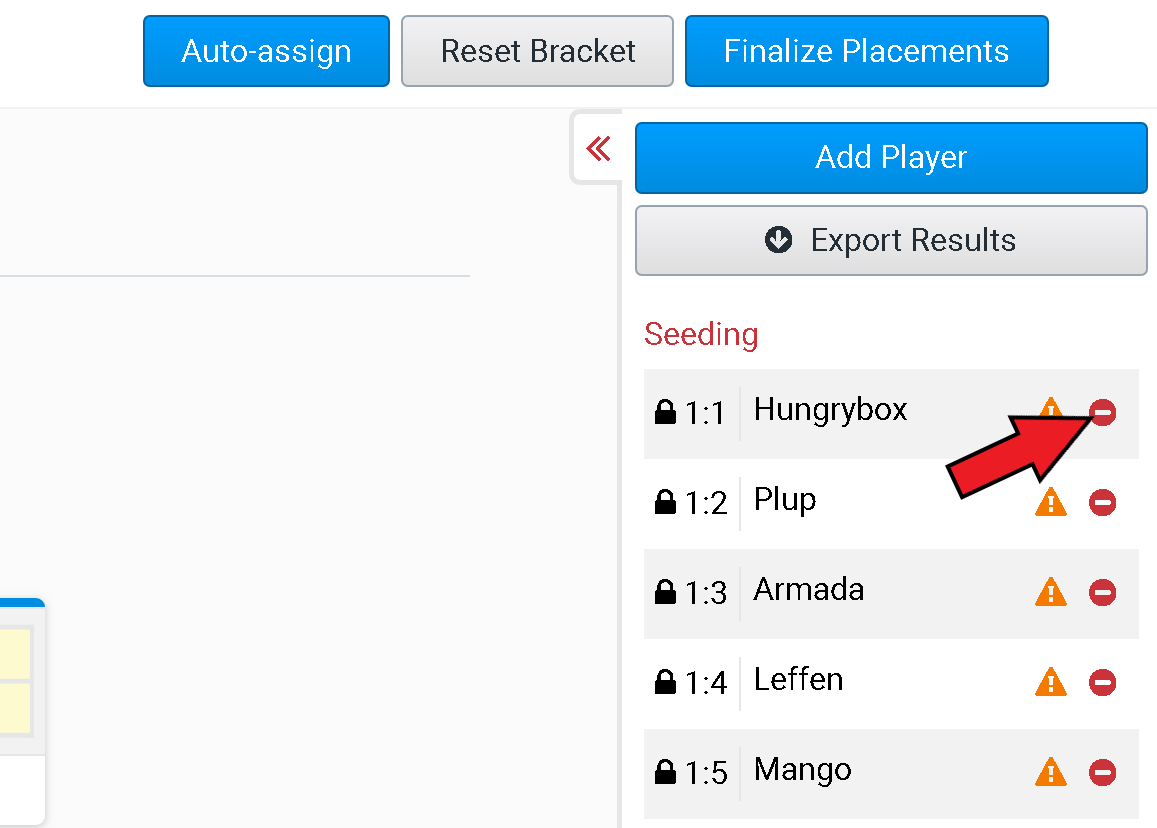 To drop an entrant from a Swiss event that has started (NOTE: Once a player has been dropped, they will not be matched up in future rounds): 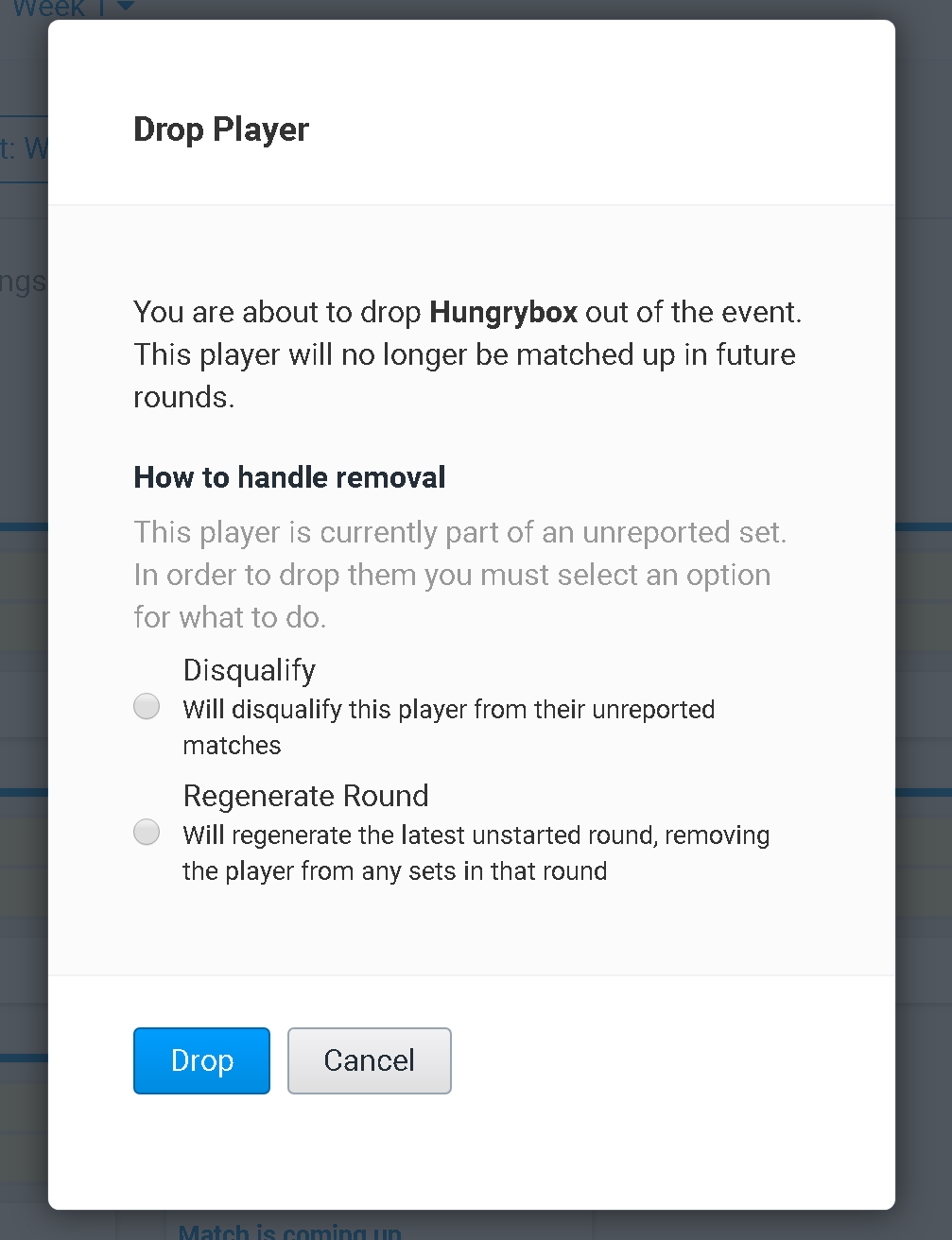 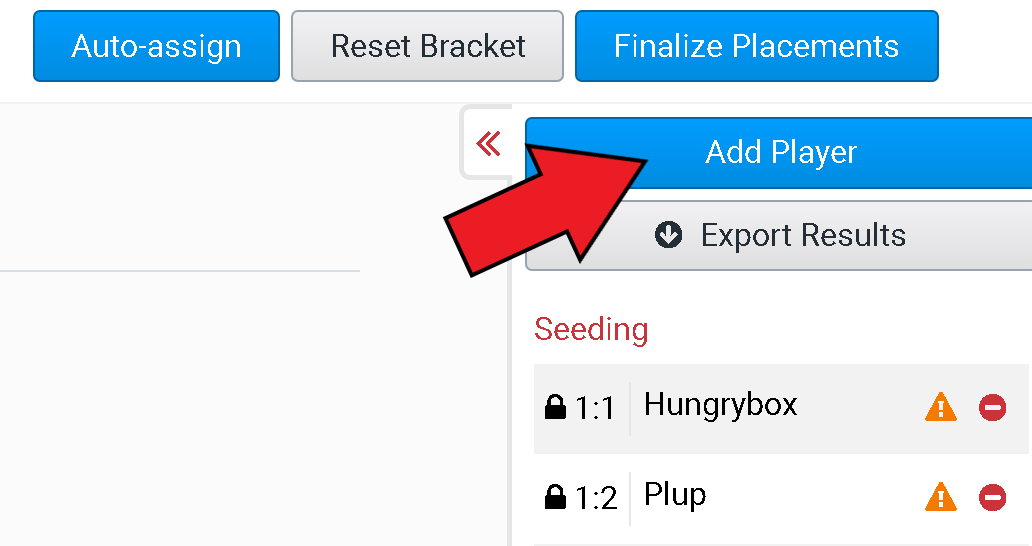 To add an entrant mid-match in a Swiss event that has started: 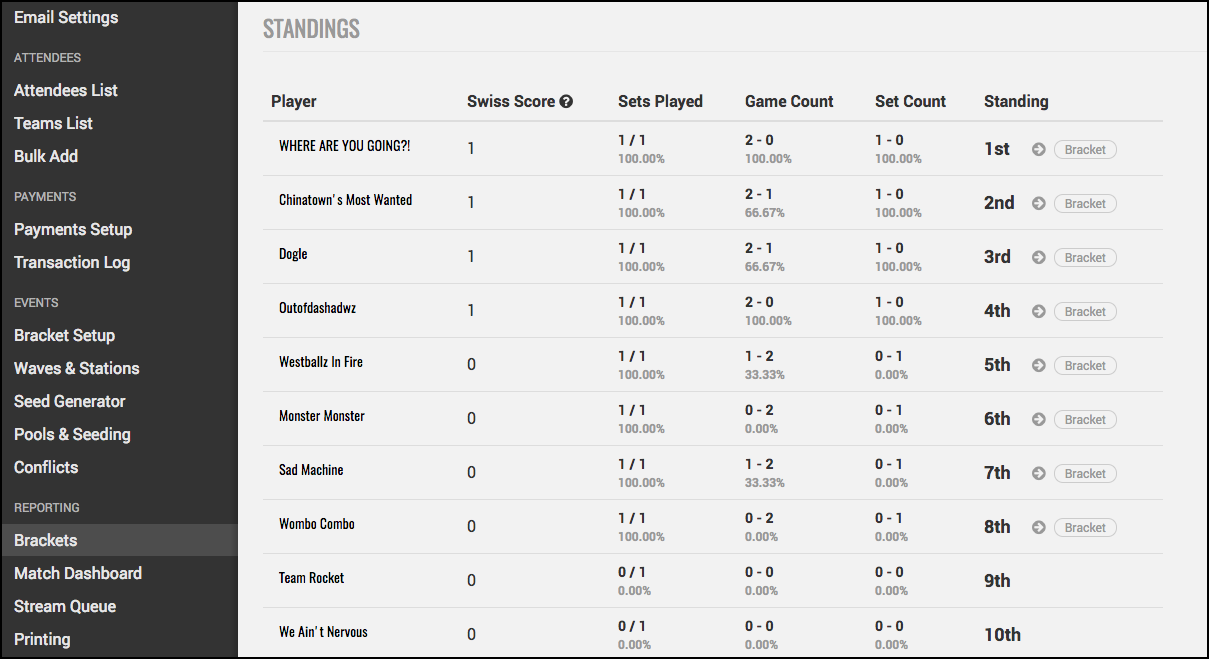 Standings are finalized once all rounds are completed and tiebreaker rules are applied to determine the winner or player progressed. Standings can also be manually changed by clicking the Finalize Placements button on the top right of the Bracket admin, adjusting the teams, and clicking Finalize at the bottom.

For any other questions or concerns, feel free to email us at support@start.gg or reach out in your support chat!