Our swiss algorithm is designed to match players with those that are closest in skill, while avoiding rematches as much as possible. In a typical swiss format, players with a record of 1-0 will face others who are 1-0, and the same goes for 0-1 players. This repeats with 2-0 vs 2-0, 1-1 vs 1-1, etc until the specified number of rounds have been completed.

However, players with the same record are not guaranteed to play each other depending on how the points are set up. Our algorithm bases the “skill” of a player on how many points they have accrued in previous rounds, meaning that setting custom point values may lead to players with different records playing each other.

To elaborate further on seeding, in Round 1 we pair the first seed with the highest seeded player in the second half of the seeding. So as an example, if there's 10 players we will pair seed 1 vs seed 6, seed 2 would play seed 7, and so on. As people join the event, they are added by order of entry and nothing else.

Additionally, provided below is an image of our Swiss phase setup in the Bracket Setup section of your tournament settings. 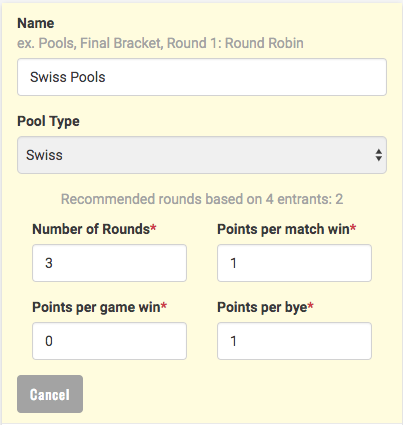 Now, let’s get into the specific steps of how pairings work. Start.gg uses a Maximum Bipartite Graph algorithm to ensure that the maximum possible number of players are paired. We start by trying to pair players within a point tier and use seeding as a secondary preference for matchups.

Since point tiers will not always be perfectly sized and we try to avoid rematches, we do the merging of groups downwards and upwards as described below. Again, as described above, we will use seeding as a secondary preference when creating the pairings within the merged groups to create the most even pairings. Here is a description of merging seed groups downwards and upwards:

Standings are based off of number of points, with tiebreakers being: H2H (head to head) among tied players and then strength of schedule (combined opponent point total). TOs can finalize placements manually if they want to use a different tiebreak method.